Publications by FSU Students and Grads

ENTRIES IN THE CETAMURA EXHIBITION CATALOGS

The Sanctuary of the Etruscan Artisans at Cetamura del Chianti: The Legacy of Alvaro Tracchi  (2009)

Publications by Students from the University of North Carolina at Ashville

Each year from 2011 to 2017, students from the University of North Carolina at Asheville, under the direction of Dr. Lora Holland and Dr. Laurel Taylor, have worked at Cetamura and undertaken study projects of previously excavated materials.

COURTNEY NOEL MILLER studied deposits of fragmented Etruscan pottery found in the Etruscan kiln, Structure K, at Cetamura, and the evidence for religious rituals in this context.  Her article, “Investigating the Relationship Between Spiritual and Artisanal Practices in  Etruria:  The Case of Cetamura del Chianti,” was presented at the National Conference of Undergraduate Research 2013, and was published online. Her NCUR contribution was based on her undergrad thesis at UNC-A, directed by Dr. Taylor.

Courtney also made a catalog of all diagnostic sherds (rim, base, handle, in different varieties of pottery found at Cetamura) that serves to confirm a date of the kiln in the third or early 2nd century BCE.

KELSEY SWANSON collaborated with Dr. Holland to study worked bone implements from Well # 1 at Cetamura. These came from strata of the well reflecting usage in the 2nd and 1st centuries BCE,  i.e., Late  Etruscan and Early Roman Imperial.  They published their findings in “Worked Bone Implements,” in Wells of Wonders, New Discoveries at Cetamura del Chianti, edited by Nancy T. de Grummond, Florence, 2017, 149-153. 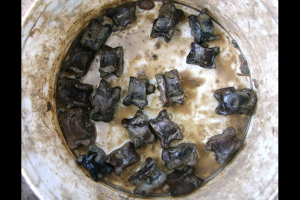 PATRICK LEBO did a research project with Dr. Holland  at UNC-A on “Astragalomancy in Etruria: An Analysis of the Astragali at Cetamura,”  which he presented at the National Conference of Undergraduate Research 2016. They presented their most significant results in “Astragali,” in Wells of Wonders, New Discoveries at Cetamura del Chianti, edited by Nancy T. de Grummond, Florence, 2017, 81-82.

Astragali, sometimes referred to erroneously as “knucklebones,” actually came from the anklebones of animals, and were used in the ancient world in games of chance and divination.  Well # 1 at Cetamura contained 168 specimens